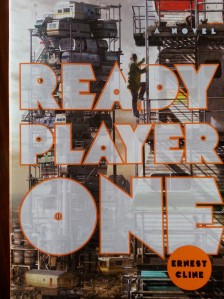 So here we are, the yearly E3 conference having come and gone from Los Angeles. A large sub-section of society rolled out the red carpet for technological innovations with ambiguous consequences for culture as we know it, and I couldn’t help but think of this post. Four years later, I’ve actually gotten around to reading the book whose review I reviewed, and at quite the opportune time. This is, after all, the age of Oculus Rift. The horrifying technology featured in Ready Player One is finally shaping up to be a real possibility.

The book plunges us into the near-future, where we meet a loner who is not alone in what we would term “anti-social behavior.” Society as a whole has taken the plunge and gone all-in on virtual reality, living the majority of their lives in a sprawling simulation. Talk about Coming of Age in Second Life.

While it hooked me in the prologue (which, upon reflection, didn’t really need to be an explicit framing device), I came away wishing there had been a deeper look into the social ramifications of the technodystopia. Myriad cultural forces were touched on, but not explored or followed to their full possibilities. Identity, anonymity, how media changes the way we are in the world and interact with one another…all of that was often glossed over in favor of step-by-step instructions for beating the game, both within the simulation and without. Oh, also there’s an evil corporation that kills people. Because…mortal peril imperative? You’d think the promise of escape from poverty within a doubly-capitalist system (virtual & corporeal) would be a strong enough motivator, but apparently that wasn’t enough. So…pile it on!

Actually, everything seemed to get short shrift in favor of repetitive sentences that kept telling readers what we already knew. A stylistic choice, perhaps, but I’m not convinced it was intentional or meant to tell us anything about the character–thought it could be argued that it “showed” us his singular focus/obsessiveness. I’m more convinced that it was “telling” us, over and over again, what the character thought, rather than showing us through his actions.

I love me some Woz–I mean, Og. Whatever.

A sequence toward the end reminded me of an episode of Black Mirror, an excellent British television show that does delve, with great success, into the social fallout from the increased presence of ever-more-sophisticated technologies, to which our culture is struggling to adapt. Our hero infiltrates what amounts to an indentured servant labor camp to enact a devious plot to save the day…or the video game. Same difference.

Occasionally, the ham-fistedness [read: telling, not showing] got to me. Especially in the scene where [*MAJOR SPOILER*] Aech reveals herself to be a young, black, queer woman. Witness the inner-thought-process-info-dump:

“I understood her, trusted her, and loved her as a dear friend. None of that had changed, or could be changed by anything as inconsequential as her gender, or skin color,or sexual orientation” (321).

Sigh…way to spout the party line, geekbro. Are we just supposed to…believe him? It’s given such short shrift for such a potentially interesting entry into an exploration of gender norms & expectations as it relates to the gaming/real-world culture of this universe. Aech herself goes into some of that when she explains why she chose a male avatar, but that, too, seems an afterthought within the larger scope of the level-up-or-die-maybe-narrative.

Even the way Wade/Parzival feels about his friend’s gender-bending could have been conveyed over a longer period of time, through dialog, actions, etc. Not shoe-horned into a half-paragraph right before the Great Big Climax. It was a major eye-roll moment for this reader. At least Aech got to tell her own story, albeit briefly.

A thorough feminist analysis of Aech and Art3mis deserves its own post.

For all its details, I came away wishing the book had spent more time exploring a great many things. Wishing it had gone deeper. Lasted longer. (Heh, heh. Haptic-glove-high-five?) Ahem. Shown us more of the societal shifts and repercussions post-simulation.
But then I asked myself, where? When? The book was so chock-full of tidbits and world-building and history and game-play, where was there room for more? Perhaps what I am aching for is quality. The prologue primed me to expect more from the rest of the book. Moar B3tt3r RAWR!!! Instead, we’re treated to the perpetually adolescent male mind and all its limitations.

Parzival is mostly surface and little substance, but perhaps that’s to be expected in a world where simulation is one’s experience of reality.

But that’s a cop-out, of course. Culture and reality are always mediated. For example, I prefer to experience reality through the medium of books. More to the point, reality is mediated through our through processes and sensory receptors. In this particular world, it’s just mediated to a different degree, with a more powerful technology.  I don’t buy the argument that it digital simulation by itself would make culture less rich, so that’s why the surface-treatment of everything bothers me. It doesn’t ring true. We aren’t plunged deep enough into this world that I know could offer us more…just below the surface.

Why is this book better than people?

This is a book about escapism–embracing it, rejecting it, embracing it in order to reject it. This book intimately understands why the company of something that mediates reality is often better than reality itself.

Although there’s much wanting, I really did enjoy this book. It provided a renewed sense of the nostalgic value of 80’s pop-culture, even if that value was manufactured and wrapped in layers of recursivity.

People don’t often offer this much intrigue and puzzling, or present as a mixture of genres–fantasy, gaming, sci-fi, post-apocalyptic, romance, coming-of-age… We all have those layers, of course, but it’s much easier to peel them back and explore them when they’re presented on the page.

1 thought on “Ready Player One”